As we approach Piledriver’s mooring (Piledriver, you’ve got to laugh!) Rick looks every bit the rock star; powder blue jacket, white trousers, sunglasses and his blonde partner, Patty. I’m all bloody nervous again but he waves us on-board.

Rick’s a charmer. It’s a cliché to say down-to-earth but that’s the way it is.

“Wanna’ beer?” he asks cheerily. I’d love one but decline – I’ve got to at least look professional.

To start with, I’m mostly getting the stock interview answers to my questions but that’s OK – we both have to settle down. And quite quickly Rick realises I actually know my stuff about the band. During a short break as we change camera stock he pulls me to one side.

“I never knew you were such a fan. You won’t ask me too detailed questions about the past will you? ‘Cos there’s loads I just can’t remember!”

Bless him. You just can’t help liking Rick. He’s like the Tommy Cooper of rock. An endless stream of very silly gags that crack you up because they crack him up! Everyone of my team falls in love with Rick [though not in the Biblical sense, you understand].

But despite the jokes, he’s also the most earnest in interviews. His passion for the band is deep-felt. And the hurt about some of the past mistakes is keen. He’s absolutely adamant there will never be another covers album. [Status Quo had released three albums of largely cover versions, which the band clearly found creatively frustrating]

A shadow is obviously cast when we talk about the tragic loss of his baby daughter Heidi. [I’m sure fate played a hand with my Production Assistant. I was let down at the last minute and had to find a replacement two days before the shoot. Not only is she called Heidi but she’s exactly the same age as Rick’s daughter would have been. If this thought occurs to Rick he doesn’t show it.] Rick’s done his grieving but he sums the feelings up with, “She’s always there, you know? You never…you can’t get over anything like that. As I say, you learn to live with it.”

During our next break, Rick tells me he has some lovely video footage of Heidi. Would I be interested in using it if Heidi’s mum, Marietta, agrees? I’m deeply flattered by this offer but I leave it up to him. In the end I don’t include any of this subject area in the film. When I later meet Rick backstage at Guilfest he’s already decided against using it. “It would always be a reminder for me when I watched it.” And he’s absolutely right.

Interview over, Rick suggests we go for a spin on Piledriver (great, it saves me asking him!) So, with Captain Parfitt at the helm we tool off down the Thames towards the legendary Eel Pie Island, home of British blues. Rick looks extremely relaxed. He does this a lot when he’s not touring (I mean boating, not looking relaxed. Though he might of course…[Get on with it! – Ed.] Every now and then a friend, or well-wisher, waves from the banks.

An amusing though potentially disastrous moment comes when Rick realises that the tide is running extremely low. Suddenly there’s an ominous thud, and Rick looks more than a little agitated. The depth gauge is only showing just over a metre of water. I signal my crew to quit filming, and supress the urge to yell “Women and Rick first!” We all hold our breath like something out of Run Silent, Run Deep. Fortunately there are no more ominous noises and we make it safely back to the berth.

Rick invites us to his favourite watering hole, and we slum it over a pint or three (actually Rick’s drinking Rose). I try to avoid being a ‘Gallon’ – Quo slang for someone who talks too much(!) – though Rick and I do chat about the various tunings he uses. My favourite anecdote (for guitar techies and nerds) is about the B minor tuning he uses for Forty-Five Hundred Times.

“I have to leave the bottom E slightly flat,” he confides.

“Because I hit the thing so f**king hard it bends it into tune!” he beams.

I am having a bloody good time. And tomorrow I start filming the band in the studio.

Things can only get battered.

First to arrive is album producer Mike Paxman and engineer Chris West. Both are really nice guys. I’d already met Mike when I’d recce’d the studio earlier in the year. He knows exactly what I’m after and his input is invaluable. With Chris we figure out the best way of recording the feed from the mixing desk. We decide to record the ambient sound in the studio as it is.

Toot, Quo’s wonderful stage manager, is sorting some bits and pieces out on the studio floor. For the purposes of filming, he’s brought the drums in from another room. I immediately nab the glitzy bass drum front and flash it to one of the cameras.

Francis and Rick are the first band members to breeze in. They’ve had a radio interview at some ungodly hour. Rick’s got a little bit of a sore head and claims I kept him up half the night drinking. This is an outrageous slur that he’s obviously enjoying. Every time a camera’s near him he takes the opportunity of blaming me. We film him as he riffles through his briefcase looking for an Alka Seltzer.

Whereupon a hand comes into shot sporting a tube of the stuff! Said hand belonging to Francis Rossi. No, I didn’t ask…

Rick and Francis are soon joined by the rest of the band, and it’s bacon and egg rolls all round. This is my first chance to meet Andrew, Rhino and Matt. But with so little time available there’s no more than a “Hello.” Andrew, however, wants to know where I got my ‘grandad’ shirt from – Joe Brown as it happens!

I notice that Francis is the first on the studio floor, fooling around with an acoustic guitar. Lloyd the guitar tech is tuning up a variety of guitars but Francis strums along anyway. This is the first time I get to see the trademark green and white Telecasters close up – the Stage No 1’s, as they are known. Christ! What a mess! They look more battered than you could ever imagine. I resist the urge to touch them, something I now regret. [That would change on a subsequent video shoot].

When Rick starts jamming away he’s playing loads of old standards from his cabaret days. And let me tell you, he’s into some serious chord shapes here. Extremely impressive. And a surprise for some of my crew.

Eventually the bustle starts to settle down. I’ve got two camera crews in the main studio and another in the control room where I have a bank of monitors to see what’s going on. Little Green Men’s Managing Director Mark Gardner (son of former ITN newsreader Andrew Gardner – for all trivia freaks) is on the studio floor taking care of techie stuff. I’m just trying to stay chilled and out of the band’s hair (pardon the pun, Francis).

During the studio sessions we get the chance to film various passes and elements of three tracks: The Party Ain’t Over Yet, All That Counts Is Love and Gotta Get Up And Go. The choices, I believe, were band manager Simon Porter’s. [Note: I was unaware at the time that all three songs were destined to be singles from the album. And though I can completely understand the commercial reasoning behind this, I don’t think it was the best creative choice for the documentary. Instead of All That Counts I would much rather have featured Rick’s autobiographical This Is Me, a far more interesting track.]

The first thing that strikes me about Quo in the studio is the VOLUME LEVEL. I somehow thought they wouldn’t lean on it so much in a controlled environment like that. I was wrong. The building literally shakes – and I’m standing in the relative safety of the control room. My crew aren’t and I realise too late that I should have thought of ear defenders. Still, my crew take it in good grace.

For any Quo fan, this is a dream come true. Between various takes, the band slip, unprompted, into so many memorable riffs: Matchstick Men, In My Chair, Red Sky…(that last one really threw me!) The highlight for me, and the only time I come close to losing my relatively professional demeanour, is when they launch into Gotta Get Up And Go. The place really rocks. I am the proverbial pig in s**t!

This band is consummately professional. They gamely play take after take for me without complaint, though Francis starts calling me ‘Mister One More Time’. Now and again I pop out into the studio floor with some instructions for the crew. Naturally my cameramen can’t help getting each other in shot from time to time.

“Can my crew be less of a presence”, I ask [rather unfairly in retrospect].

“Take the bow off!” quips Francis. [And every time I asked where cameraman Robin (Fox) was, he’d yell “Ask Batman!”]

Rick’s busy sticking ear defenders up his nostrils. I have no idea why. Rhino keeps playing with the pretty lights on his guitar.

“Spinal Tap or what?” he cries gleefully.

Andrew wears a perpetually bemused expression, as if he can’t quite remember why he’s here. Matt just gets on with it. A very solid chappy, with apparently none of the psychotic traits historically associated with rock drummers. 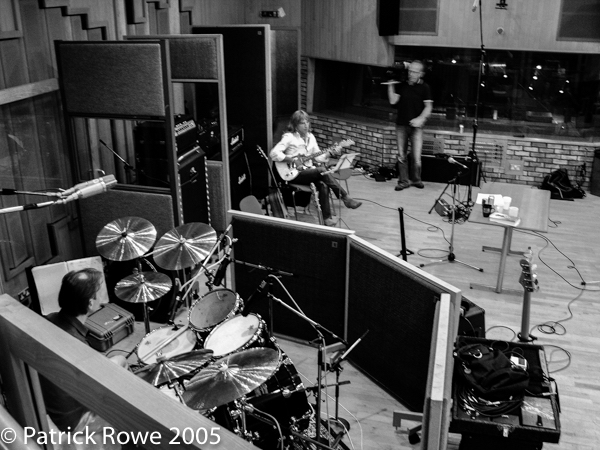 I’m smoking like a bloody chimney! During a break, Rick sneaks over to me lighting a fag.

Then announces more loudly to everyone in the control room: “We had a right rocking night last night. But there were people smoking and everything. Disgraceful!”

Eventually it’s time for album Producer Mike Paxman to cack it. The band is going to listen to some of the mixes for the first time. And we’ve been allowed to keep the cameras there. Chris West starts ‘Party’ off and it’s ABSOLUTELY F**KING DEAFENING! The shocked reactions you see in the documentary were real! It’s interesting watching them listening. Especially Francis, who is very intense at this moment. You can see how much it matters.

When we finally Wrap, the band and my crew pose for a team smudge (photo).

“A big ‘thank you’ for the magnificent Status Quo!” I cry.

I hope he does…

[And now there were more interviews to film]

Reader feedback is welcomed and appreciated.

15 thoughts on “STATUS QUO: The Party Ain’t Over Yet documentary – Part(y) Two”